Our emphasis is on quality. You can see that in all of our projects,” declares CK Ng, managing director of CK East Group. “We may not be competing with the big guns but we place great emphasis in giving our projects outstanding value. You could describe us as a boutique developer.” He is not interested in categorizing his firm according to size but is keen that property buyers, know CK East for its quality projects, which are tied to its superior furnishings and high end workmanship.

This was no idle boast but a candid assessment from an entrepreneur who rose up the ladder the old fashioned way – through hard work and sheer bloodyminded belief in his vision. By Ng’s own admission, his SPM results were far from impressive and his financial circumstances forced him to endure a job he intensely disliked in a construction firm. But the then 19-year-old made full use of the opportunity to learn more about the property industry and build his network of useful contacts. His perseverance was rewarded as he worked his way up to become partner before breaking ranks to go solo in 2002.

Ng’s book of contacts became essential when he set up his own construction firm. He got his first big break when Platinum Victory Sdn Bhd – approached him to do some earthwork, which then led to infrastructure work. Ng says he is very grateful for the opportunity to expand his area of expertise from construction into infrastructure. “I was just a small firm but when opportunity knocks, you must seize the moment,” he states. “It was very challenging trying to learn the relevant know how in a short space of time but it was something that needed to be done if the company was to grow.” 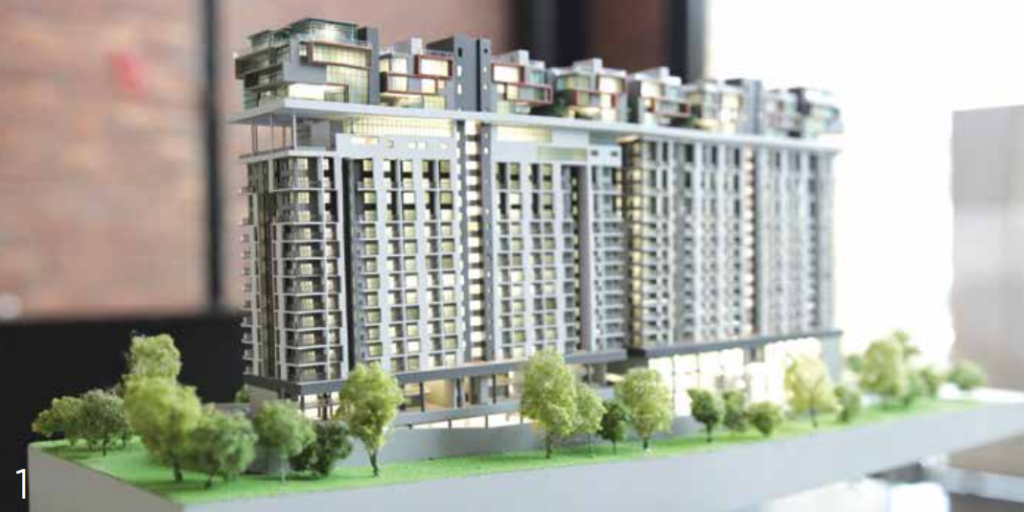 His next move was to establish CK East as a developer of unique vision and capability. Ng took over a bungalow project called Anjung Melati in Taman Melati, Kuala Lumpur. The project was facing several issues, not least the fact that the original developer had under priced the units. “There were bookings but actual signed S&Ps were few and far between,” recalls Ng. “Many potential buyers could not believe that such nicely appointed bungalows could be built at the original price. There was a clear lack of buyer confidence.” Ng managed to turn the project round by revamping the pricing and tweaking the designs and dimensions. He gave an example of the latter as when he raised the ceiling height of the bungalows from 10ft to 15ft, which greatly improved the aesthetics of these high end abodes. The project was sold out in 2012.

DIAMOND IN THE ROUGH

“A diamond in the rough” is how Ng describes the latest development his company is involved in – Rencana Royale TTDI. Central to his vision was to capitalize on the development’s prime location of Taman Tun Dr Ismail. Ng certainly does not believe that it being Malay Reserve Land is any sort of hindrance to the success of the project. “Do the math” he challenges. “There are plenty of potential buyers in the market, especially in the Klang Valley, who appreciate the location of the project and would be willing to pay a premium.” In fact, Ng sees the pioneer land status as a means of attracting buyers with lower purchase prices as compared to nonreserved land. But as he points out, in prime locations such as TTDI, properties would command premium rentals, regardless of whether they are situated on reserved land or not. Thus the lower purchase price makes the Malay Reserve development a much more attractive proposition

The RM380 million project will offer 627 units of suites, 2-storey garden terraces, studio suites, duplex suites and corporate suites, as well as two facility floors. The facilities include meeting rooms, a theatre, barbecue area, gym and prayer room. Sizes for the units range from 472 sq ft to 4,296 sq ft. According to Ng, take up rate is about 80%.

As a taster of the premium-ness of Rencana Royale TTDI, Ng highlights the Suites in the Sky, which he describes as “corporate suites on top of the 13-storey development”. These 16 exclusive units will be privy to their own private elevators and even swimming pool, among others. Ng certainly believes in going the extra mile to attract buyers by with value propositions such as guarding privacy with private walkways, lobbies and car parking.

“We concentrate a lot of our efforts in the common areas rather than placing too many fittings in individual units,” he said. This is because each home owner will have personal preferences. CK East is not scrimping but by not cramping units with gadgets, fittings and furnishings, owners can customize the units accordingly. “That is why all our projects such as East Utama, luxury terrace in Damansara have very nice common areas, from the lobbies to the facilities. This gives our projects an exclusive and premium feel.”

This is an approach Ng brings to all his projects; whether they are they are situated on pioneer land or not.

Ng has come a long way since branching out alone in 2002, with a new low-rise residential project called One East, located near Bandar Utama, Petaling Jaya. Also in the pipeline are 29 link houses in Gombak, Kuala Lumpur, slated for a year end launch.

Ng says that his contractor background has helped him greatly as he understands the finer points of the construction industry. He knows where construction faults usually occur and what the prices of raw materials are, thereby avoiding many of the usual pitfalls faced by developers.

As parting advice to upcoming property industry leaders, Ng said to “not place great importance on one’s self but rather to always focus on the needs of the buyer.” Last but not least, he urges property players to practice “honesty is the best policy”. Ng’s rise from humble construction firm employee to successful entrepreneur is proof that his vision and approach can bear fruit.